This series of posts will be different than all the others posted so far. This is a roundtable of homebrewers. I’ve asked them some questions about how they got started. They are from all experience levels, both coasts, and even from our neighbor up north.  One thing we all have in common is we are all homebrewers, and we all had to start somewhere. This series of questions is designed to help would be brewers break the ice, and get brewing. It’s good to hear how we got started, the gear, recipes, tips, and of course the mistakes we have made. I plan be doing these as an on going series of conversations about topics useful to have a breadth of perspectives on. I’ll start part 1 of the Q&A with an introduction to the participants and how they got started brewing. Shawn is originally from Prince Edward Island, but has been living in Fredericton, NB for almost 8 years. A place he notes as not having the greatest beer selection, a driving force behind his home brewing habit/hobby. He is a member of the Brewnosers, located in Halifax, NS, although has not been able to actively participate in regular club meetings. Shawn also shares his recipes, brewing and tasting notes on meekbrewingco.blogspot.com. When not Brewing and working as a pharmacist, he enjoys spending time with his wife and daughter. They spend as much time as possible at cottages in both NB and PEI.

Shawn got into homebrewing after getting into craft beer. It started with a trip to Belgium which exposed him to a new world of beer.  After he spent months researching and reading online about beer, where he stumbled upon the homebrewing forums on Beer Advocate. He couldn’t believe that people were brewing (successfully) all of these beer styles at home! After reading John Palmer’s How to Brew, and finally buying some equipment, he brewed his first batch in November 2009. I’ve even had the pleasure of swapping a few bottles with Shawn, so I can attest to his brewing acumen.

James started brewing in 1996. When his friend Andy Sparks, a a homebrew shop owner asked him to help him produce a couple of local cable TV ads for his store. He was paid with homebrew equipment kit. James jokes, that it was kind of like getting a free inkjet printer. His first batch was an extract kit Andy’s shop. It turned out pretty well despite a massive boilover on the stove. A couple of years later, Andy convinced him to enter a homebrew competition. Both beers he entered won their categories, and his robust porter won the whole thing. He has since retired from competition. (Way to go out on top). Bil is is another New England home brewer which met via twitter. He is 32 and has been brewing for about 6 years. He is very active in the Rhode Island Fermentation Technicians (RIFT) hombrewing club. By day he is a web developer, and by weekend he is a gardener and beekeeper. He is kept busy fixing up his 130 year old house. Bil is also a ranked BJCP judge, and you may run into him any of the New England home brewing competitions, like my friends Rob and Lisa did at ocean state homebrew competition.

Bil wanted to start brewing for a few years but never had the extra cash to get started. He managed a grassroots kick starter of sorts where his friends kicked in to invest in his home brewery. They were promised six packs of his first few batches, and it turned out to be a lot of fun. They voted on styles, and would have a gathering for each phase of the brewing process. Sounds like a novel way to get started, and get funds. Especially since we all tend to give away many a beer to our friends along the way. 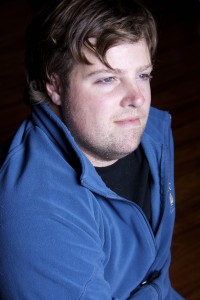 Mike is a long time friend of mine, we have known each other since pee wee soccer in our home town. Mike is a stay at home dad, a small time farmer, a tinkerer, and a home brewer. In just a few weeks he will be a beekeeper. Mike recently joined Brew Free or Die (after my incessant nagging) and is exited to be part of that community. He also has a blog where he writes up some of his home brewing projects. While we have known each other for ever, and have both been brewing for a few years now, the distance between us has kept us from collaborating beyond recipes and ingredient swaps.

Mike’s first brewing experience was in 2001, which he claims was a disaster. His wife (then girlfriend) purchased him a fairly elaborate homebrewing kit, which included a nice brew pot, carboy, and ingredients for an american lager. Rather than read the hombrewing book she purchased him, he just grabbed the small instruction sheet that came with the ingredients and went for it. Tying to to boil 5 gallons of wort in a 6 gallon pot on a very feeble electric cooktop. Then emptying out the fridge shared among his three roommates to make room for his carboy. The batch was a disaster. He put away his equipment until about 2007. Chris Lewis from Chula Vista, California
Chris is the only west coast homebrewer participating in the homebrewers roundtable. I met Chris online, exchanging homebrewing tips and ideas on twitter. Chris maintains a blog, lewybrewing.com, which started in 2010, to logs recipes, tracks experiments, and connect with other brewers. Chris like myself has a kid running around which makes it hard to actively attend a regular homebrew club meeting, instead he claims The Brewing Network as his club. He’s been a long time listener, and he can attribute some his progression from brewing bad beer to good beer to them. (Is there anyone who listens that can’t?)

He brewed his 1st batch on Dec 30, 2002. He was using a a Mr Beer kit his sister ordered from Skymall on a flight from Nashville to San Diego. It was an English Brown, like many 1st batches. He remembers looking at the yeast eating away and he was hooked. However at the time he didn’t know what to do with the passion with the limited brewing resources available. Joel is another New England homebrew I have come across on twitter. He is a frequent attendee of the Central Street Farmhouse home brewer’s club in Bangor Maine. It’s a loosely scheduled and informal get together for brewers to share their beers. Like many of us, this hobby consumes much of his time. When he’s not brewing, he enjoys being outdoors with his dogs and special lady friend.

Joel’s first experience brewing was helping his brother-in-law bottle his homebrew. He watched him brew a few times, then finally decided to give a go on his own. Being young and intersted in craft beer, he started brewing as a way to save money on beer, but was hooked by the process. Ry Parcell from Rural Vermont
Ry is a southern transplant to Vermont. He describes himself as first and foremost a father and husband. He has a tremendous sense of place and connection to the land with his hobbies and heritage. Those things drive him as a brewer to produce beers that reflect where he is, what is in season, and what is happening in his life during that time. While he does not belong to any formal brew clubs he regularly brews with his close friend Don, and batches that he doesn’t, he trades bottles. Ry maintains a blog, where you can find recipes, and tasting notes for his saisons, sours, and other local inspired beverages. He also writes a bi weekly article for www.love2brew.com. The articles focus on the “story” of his brew day and process and ends with the recipe.

Ry states all things he is passionate about can be traced directly back to his family, and brewing is no different. While back in Virginia with not much to do, he dug out his fathers decades old brewing equipment out from the garage attic. His first batch was a kit picked up at a local homebrew shop, which he named Stinky Pete Wheat. A name he is still quite proud of. Like most of our first batches, the beer turned out decent at best but its real shining moment was turning him onto brewing. The other great part of that brewing experience was it inspired his dad to take up brewing again and it’s now something they share. You may recognize Michael from his popular blog http://www.themadfermentationist.com/. He has written featured articles in Brew Your Own magazine as well as been a guest on both Basic Brewing Radio, and the Beersmith podcast. He a member of two DC area clubs, BURP and DC Homebrewers. He started the Mad Fermentationist blog after moving down to DC to start working for the Bureau of Labor Statistics, to provide an outlet for his brewing, and now contains over 500 articles on brewing.

Most recently Michael is involved in two significant projects, first as a recipe consultant for Modern Times Beer in San Diego, CA. You can support Modern Time’s build out their fermentorium here on kick starter, and even purchase an opportunity to brew a batch with Michael on the Modern times pilot system. His is also authoring a book about American sour beers. The American sour beer book has just been picked up by Brewers Publications (congrats Michael) and is slotted for publication in 2015. In addition to brewing beer Michael appreciates all types of fermentation, but the have been on a bit of a hiatus. However he indicated his girlfriend has picked up the slack, recently making bread, lacto-fermented hot-sauce, kimchi, red wine vinegar, and yogurt. As Michael said, A couple that ferments together, stays together?

Michael has been homebrewing for eight years. He brewed his first batch as part of a student taught course (Beer Brewing and Appreciation) in his final semester at Carnegie Mellon University. He and his friend Nicole brewed a brown ale for their mid-term assignment. The result was tasty enough, and he was hooked.

Part 2 of the Hombrewing Roundtable will be available in the coming weeks. Please let me know what you think of the series, if you have any questions you’d like answered by the brewers, or if you’d like to participate in future rounds of interviews.

3 comments on “HomeBrewing roundtable part 1: Getting to know the brewers”

HomeBrewing roundtable part 2: Getting down to brewing